You are here: Home1 / Dating2 / How To Get A Girlfriend

Life is meant to be shared. You’re looking for someone to be your number one, your lover and your friend.You may have had trouble getting and keeping women in the past. You may even wondering “How do I talk to women?

Many men I talk to complain that women only see them as a friend or that women don’t even want them around. Getting a girlfriend may seem like an impossible task right now. That’s okay. This guide is for you.

We’ll cover how to meet girls, how to make girls want you, how to talk to a girl, how to ask girls out and how to go from dating to a relationship.

What Women Want In A Man

As a dating coach, men often ask me…

“How do I make girls want me?”

I tell them that women are all different but in general, they’re all looking for the same things in a guy.

Plenty of different kinds of men manage to get girlfriends and keep them. But if you look at those who are successful with women, who make them happy and keep them around, you’ll notice they have a few things in common.

These are LEARNED traits that you can adopt to make you stand out from the pack and be irresistible to women.

This one isn’t as hard as it sounds. You don’t need to become the quarterback of a football team or the CEO of a Fortune 500 company to be a leader. What you need to do is demonstrate leadership qualities.

If you’re planning a date, (more on this later) don’t ask her what she wants to do. Have a plan. There are plenty of simple ways you can take charge in ordinary situations. Pick her up from her house whenever possible. Choose what movie you watch.

Be in control without being controlling.

In any organization you’re a part of whether it’s a club, a sports team, or your workplace, take on leadership roles whenever possible. Take on more responsibility when it’s offered and stay in the know. When she sees how people look up to you, she won’t be able to keep her hands off of you.

Be In Control Of Yourself

Being level-headed is a great way to show that you’re dependable without coming across as clingy. Don’t let anything external affect your emotions or your actions.

If you’re angry, you’re not in control because you’re letting others control your emotions. If you have a strong opinion, stick to your guns and don’t be afraid to assert yourself. Exercise, meditation, and self-discipline are great ways to take control of your own emotions.

If she sees nothing affects you, she’ll know that you have inner strength and confidence.

If you have trouble talking to women, keep it simple. The first step to female friends is to engage the women around you in small talk: servers, cashiers, female coworkers. Don’t feel pressure to impress them or make them laugh. Just listen and talk. 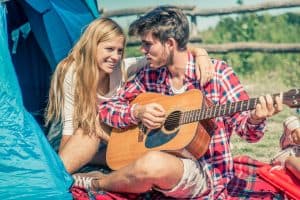 This will be great practice for when you move on to asking girls out.

Now I’m not talking about being some kind of sexpert (although that never hurts). I mean you need to be able to provoke a positive emotional response.

Make her laugh. Get her talking about something that interests or excites her. Buy her a bagel. There are plenty of ways to get a woman to feel good and if she starts noticing she feels better when you’re around, she’ll want you around more and more.

You have one goal already: getting a girlfriend. Apply this to other areas of your life. It can be as simple as running a 5k race or as far-reaching as winning an Oscar for Best Sound Design. Find out what you want and take positive steps towards it and women will take notice.

Striving towards goals says certain things about you: you know what you want, you’re confident in yourself, you’re independent. All of these things make you desirable.

If you think that this is all crazy talk, consider this:

Why do women like the lead singer of a band?

He’s a leader. He’s in control of his voice and his physicality on stage. His music makes them feel good. If he can record music and play shows he’s capable of following through on goals.

Think about other types of powerful, attractive men: A-list actors, CEOs, Firefighters. They share most, if not all, of these traits.

Alright, you tick all these boxes, more or less. You’re a goal-oriented, disciplined, in-demand, positive guy without a girlfriend. What next? While this advice will make you more attractive to girls, it won’t necessarily make them approach you. Whether it is genetics or social conditioning, women are significantly less likely to approach men and ask them out.

Where To Meet Women

Women: they’re everywhere. But how do you meet them? Your goal is to get into a situation where you get to regularly interact with women. No, not the strip club. Try volunteering, join a club, take an exercise class. There are co-ed sports leagues offered by most community centres.

If you’re looking to maximize the number of women around, look for activities women are more likely to do. Maybe a dance class rather than fight club. And a bonus is you’ll pick up a skill and gain confidence. Girls love a guy who wants to better himself.

How To Talk To Women

The best thing about this strategy is you don’t even need to approach women. Putting yourself in these

situations will make talking to girls inevitable. Introduce yourself. Ask them for help with something. Comment on how much you’re enjoying a specific aspect of the activity. Small talk is key to building a relationship.

Be friendly but keep it casual and take it slow. Remember, you want to be available but not desperate. You don’t need them. You’re in control and independent.

If the conversations get longer, you make each other laugh, and you find she’s seeking you out that means you’re connecting as more than just acquaintances.

Now is time to ask her out.

How To Get Dates

So you’ve built rapport with a specific person and you want to take the next step. There are important things to keep in mind to help you close the deal.

The next time you talk, ask her out for drinks, coffee, or lunch. These seem cliche but they work because they’re not too much of a commitment for her (so they’re non-threatening) and they’re “classic dates” so they’re unlikely to be confused for friend activities. Women love a guy who isn’t afraid to use the word date. 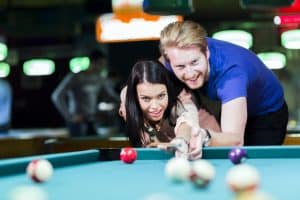 Be specific with what you want to do. Come up with an idea for a fun activity based on her interests and what you know about her.

Group hangs can be fun but if you’re serious about pursuing her romantically, you don’t want to be her friend first. She’ll start seeing you as just one of the guys and that will make it difficult to change her mind. If she asks you to do a group activity, tell her you’re busy and use that as an opportunity to suggest a one-on-one date later on.

“I’d love to but I can’t make it Thursday. How about we grab a lunch next week? There’s a new place on Smith Street where the menu is all grilled cheese.”

What if I end up in the Friend Zone anyway?

This is a risk you’ll need to take. Any girl who will friendzone you wasn’t interested in the first place. Don’t take it personally. This doesn’t reflect on you or her. It’s probably just not a good match.

There’s still a benefit here: another female friend will increase your attractiveness and give you more experience talking to women.

If you want out of the friend zone, there are things you can do to make her see you as more than just a friend.

So you’ve been out on a few dates with her and it’s going well. You have chemistry and you plan to spend more time together. But how do you go from casually dating to boyfriend and girlfriend?

This is the easy part.

If you’re reading this page, you’re probably pretty goal oriented. What I mean is, you’ve identified a goal (getting a girlfriend) and are moving towards achieving it. But now is the time to pump the brakes. 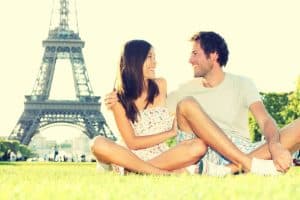 Keep going on dates and enjoying each other’s company. Don’t make any big statements about love or your feelings. Don’t overdo it with gifts and don’t call or text her non stop. In fact, do the opposite of what your instincts are telling you.

Now is the time to ask yourself:

“Would she be a good girlfriend?”

“What is attractive about her?”

This may sound crazy but it’s a key part of the process. Maybe you’ve been so blinded by the end goal that you’ve missed that this girl just isn’t right for you. You now know that you can attract women, so now’s the time to be choosy.

Either way, continue to silently ask yourself these questions when you’re around her and something powerful will happen. You’ll stop chasing her and she’ll start chasing YOU.

That’s because a guy who is asking himself these questions is in control, he’s careful, and he’s NOT DESPERATE. This is where the classic false belief that “women like assholes” comes from. Women like men who know their worth and don’t need to prove themselves to anyone.

Don’t treat her differently but continue to ask yourself if she’s the one for you and watch as she gives you what you want. You’ll be going steady before you know it. 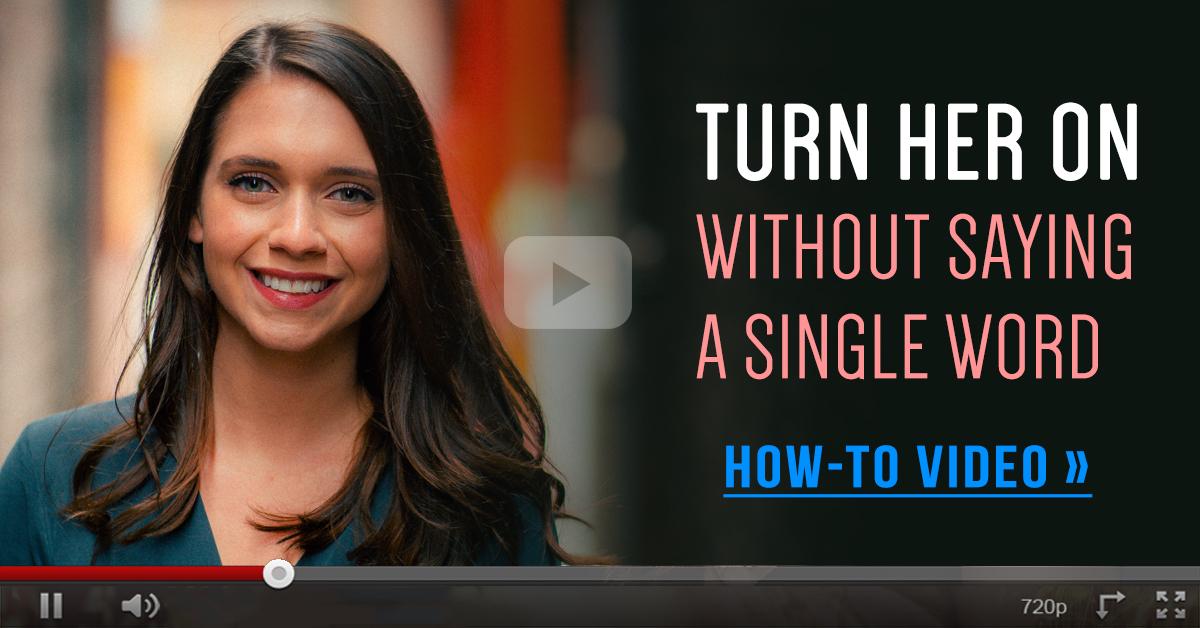