You are here: Home1 / Dating2 / Reader Question: Should I Lie In My Online Dating Profile?

I’m a 41-year old, recently divorced man with two kids. A friend recommended a particular site to me and I’m new to this kind of thing. My question is do I have to tell the entire truth?  I’m not sure everyone is being truthful anyway. Which lies are okay and which ones are not? Can I lie about my age and other stuff until I get to know someone better or vice versa? I also don’t want to seemingly destroy my chances right off the bat. LOL I look forward to your answer. Thank you!

On the face of it, this is a very easy question to answer. The answer is NO.

But it isn’t always so simple, you say. What, exactly, do you mean by lie? There are lies and there are lies, right?

When I was in college, one of my best friends saw his mother’s driver’s license and noticed it said she’d been born 10 years earlier than she’d always told him. Maybe it made her feel better to lie to her family and friends about her age, but it really upset my friend, her son. “I felt like I’d lost 10 years of my mother’s life in one day,” he told me.

Now, that’s not a dating story, but it’s a good illustration of how even a seemingly unimportant lie can hurt other people in ways you might not foresee.

Here’s my question for you. Why would you want to lie in your online dating profile?

Why People Lie in Online Profiles

Here is what people usually tell me.

I don’t feel confident that I can attract a person unless I lie about my age, or my weight, or whatever.

I understand this feeling – really, I do. All of us feel a bit insecure about ourselves in one way or another. Some people really struggle with insecurity. We feel too old or too fat or too ugly or too bald or too skinny or too poor to possibly be interesting and attractive to another human being.

This can be a crippling problem. And so it is tempting to shave off a few years, or a few pounds, in that online dating profile. Or to put up a picture taken five years back when you didn’t show quite as much scalp through your comb over, or before you added those five or ten extra pounds.

Who Exactly Are You Lying to?

But think about what you are doing. Not only are you lying to the people looking at your profile, but you are also lying to yourself. You are telling yourself the negative message – I am not good enough the way I am.

So you feel insecure. That’s a common feeling.

But instead of courageously telling the truth about yourself, and creating the opportunity to discover that someone might really like you just the way you are, you lie and this reinforces your insecurity. When people respond to your profile, they’re responding to a lie.

And you know it, consciously or subconsciously. Somewhere in your mind that negative message is playing – I wasn’t good enough and had to lie, and that’s the only way I will ever find love.

That is not building a strong foundation for a relationship with another human being. Entering a relationship where you feel unworthy, so unworthy that you had to lie to get into it, well, that’s not likely to turn out well.

Not only is there a good chance your future partner will someday find out about the lie and be disappointed in you, but there’s also a good chance you won’t be very successful as a partner in the relationship. People who feel they are unworthy don’t stand up for themselves. They don’t ask for what they need, or fight for what they deserve. To build a strong relationship that will endure, you need two adults who ask for what they need and work their problems out together.

Seeking Love Is a Leap of Faith

If you don’t have faith in yourself, faith that you are worth being loved just the way you are, you are setting the stage for a very unhappy and unhealthy drama further down the road.

Now, I know there is a certain amount of deception involved in dating and finding a partner. 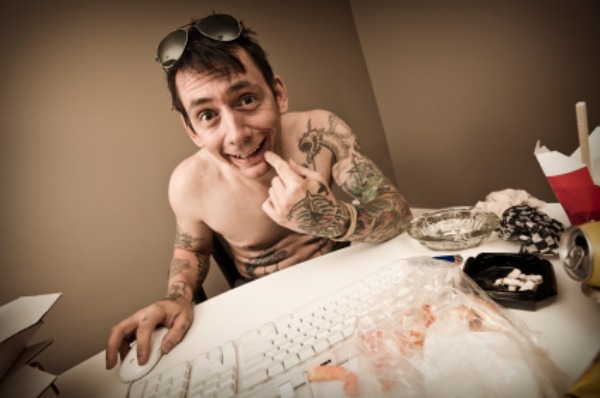 People choose the best or most flattering clothes. They wear makeup and boast about their achievements. Is that lying, too? Is putting on lipstick a lie?

Obviously, there’s a spectrum here, with putting on lipstick or sexy clothes at one end and lying about your height or weight or criminal record or whatever at the other.

Somewhere along that spectrum is a line you don’t want to cross. You will have to decide exactly where to draw that line yourself. All of us have certain things about ourselves we’d prefer to hide or not reveal. But by trusting yourself and telling the truth, you may get a very happy surprise.

Years ago I talked with a man who had a criminal record. His previous wife had divorced him and, after many years, he felt he was ready to start dating again. But he was troubled about his criminal past. His fearful side told him to hide it. But in the end he decided, quite courageously, to tell all the women he dated about it, on the first date. He was one of the bravest people I ever met.

Some of the women he told walked out and he never saw them again. I can’t imagine how terrible that made him feel.

But one of them stayed. They got to know each other and now they are happily married. This man found out that, although he was afraid of being unworthy of love, it wasn’t at all true. He found someone special who really loved him as he was.

And he can enjoy being happily married to this person without ever worrying what will happen if she finds out about what he lied about, since he didn’t lie about anything.

So there’s no need to lie in your online profile. Be who you are and have faith that there is someone out there for you, Anton … Someone who will love you for who you are.