You are here: Home1 / Relationships2 / Reader Question: Why Do Good Women Stay With Jerks?

I’ve been friends with this girl for quite some time. She’s giving me mixed signals and told me that she wants to leave her relationship because he mistreated her. It’s been months since she said that and I’m still waiting. I’m showing her signs but not really in a position to make a move since she’s still in that relationship. Why is she still staying with him if he’s really mistreating her?

It’s one of the oldest questions people have ever asked. Why, oh why, oh why do nice, good women date jerks in the first place, and why, why, why do they stay with them? You don’t know how many times I’ve been asked this question or some variation of it! 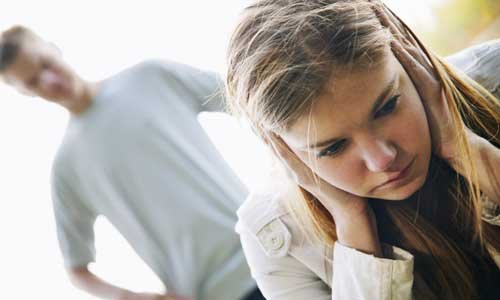 It’s an old story. You meet a wonderful, kind, friendly, sweet, attractive woman and are shocked to find that she’s in a relationship with a boorish, obnoxious, selfish jerk.

You wonder why she puts up with his awful treatment. He cheats on her, perhaps, or is lazy and doesn’t do his share of the chores. He belittles her or teases her –though not in a good way — all the time.

He tells her constantly that she isn’t good enough, and she seems to believe him!

What’s going on here? Wouldn’t she be much happier without him? Or in a relationship with a much more loving and attentive and kind partner (such as yourself)?

Who Said Love Was Logical?

Let me tell you – she might be much happier single, or with you. Probably she would. But you’re assuming that love is a logical, calculating thing, that women (or men, for that matter) sit around doing a cost-benefit analysis on their partner, weighing the pros and cons and then making a cool, rational decision whether to stay in the relationship or pack their bags. That’s just now how people handle their relationships.

A lifetime cost-benefit analysis is something you do when buying a car or making some other long-term financial investment. And, to tell the truth, not very many people even do it when buying a car. They see the car they love and figure out a way to buy it, to make it happen.

Nobody does it when it comes to love and relationships.

Women are human beings, and human beings are complex and quirky. We start or stay in relationships for a lot of reasons, some of them conscious and others subconscious or unconscious. Sometimes we fall in love with jerks and, yes, sometimes we stay with them when we shouldn’t.

Often, women are attracted to “bad boys” who don’t obey the rules, or who ignore them and act like they aren’t interested. It’s just human nature to want something you can’t have. That’s true for both men and women – often, if someone you like plays hard to get, you like them more.

Once women are in a relationship with a jerk, there’s a certain amount of inertia that comes into play. We all tend to keep doing what we’ve been doing, to stay with the person we’re with unless something big shakes us up and shocks us out of it.

People are willing to tolerate quite a bit from a partner rather than take the huge risk of breaking up and turning their life upside down to try and find another lover. There’s an old saying about “The Devil you know …”

And women face a lot of pressure to stay in a relationship. First of all, there’s the crushing pressure on all women to look and be attractive. Pick any part of a woman’s body and you will also find someone out there telling them theirs doesn’t look good.

Even women who feel pretty good about themselves exert energy fending off these messages every day of their lives. If the messages are coming from their “jerk” partner, sometimes they start to believe what he’s saying. Then they feel lucky to have even him and so they stay with him. So some jerks play on a woman’s insecurity, either consciously or unconsciously, to keep them.

Women are considered to be failures if they aren’t in a relationship. Though there is some social pressure like this on men, it is much less powerful. Even in the twenty-first century, men are still given much more social freedom to be single, to play the field, and so on.

Women feel this social pressure to be in a relationship, any relationship, rather than be pitied or gossiped about as a failure. What’s the male equivalent of a spinster or old maid? Do you know? I don’t. “Bachelor” is not a bad word.

Another reason women may stay in a relationship with a jerk is that they grew up with poor relationship role models. Perhaps their own mother, for whatever reason, tolerated a nasty, cold, cruel partner for far too long.

A child growing up in that sort of environment may quite easily become an adult who thinks that’s just normal. That’s how relationships and marriages are supposed to be. Boys who grow up seeing their fathers treat their mothers badly may never learn how to treat a woman well. And girls who grow up in that situation may never learn how to stand up for themselves, or how to find someone who is good for them.

Now I presume, Cole, you may be wondering, what can you do about this?

What’s a Non Jerk to Do?

The only advice I can give you is to keep treating her, and all women, nicely.

Be kind and polite and considerate, in your thoughts, your speech and your actions. Don’t treat women as objects.

You may decide to tell her how you feel, and that’s fine. Let her know (she probably knows already – trust me) how you feel and then leave the rest up to her. Keep the focus on how you feel about her. Don’t ask her, “Why are you with that jerk?”

Because, in the end, if she’s staying with the jerk, she has her reasons. She’s not ready to leave him yet. Someday, perhaps soon, she may be. And then you’ll be there. But accept the fact that she may not ever leave him.

Overall, I say don’t waste too much time waiting for her. Know that you’re a good person yourself, and there are lots of other women out there who appreciate nice men.