You are here: Home1 / News & Research2 / Monogamy Stems From Oxytocin

What keeps two people in a relationship? Studies show that in most mammals, monogamy isn’t prevalent.

In fact, our closest “animal cousins”, gorillas, are some of the least monogamous species on the planet. The relationship between a male gorilla and a female gorilla is so tenuous that as soon as the female turns away for just a few minutes, the male gorilla is known to have sex with several other female gorillas.

So Is Monogamy Really Natural? 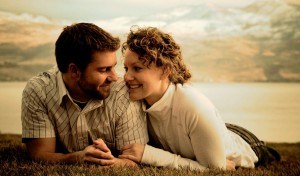 So what is monogamy and why is it mostly a human phenomena? Are humans naturally born to be monogamous or are we born to have sex with as many people as possible?

Researchers at Bonn University Medical Centre thinks they have found the answer: Oxytocin. What is oxytocin?

To put simply, oxytocin is a hormone produced by the brain — it’s the hormone responsible for that feel-good, fuzzy warmth you experience after having an orgasm, and some can be produced just by simply cuddling with the person you love. It’s the “love” hormone!

The Love Hormone and Evolution

“An important role in partner bonding is played by the hormone oxytocin, which is secreted in the brain,” states Dr. René Hurlemann of Bonn University Medical Center.

A group of men in relationships were shown pictures of a set of women. One of the pictures was a picture of their girlfriend or wife. Oxytocin was administered by nasal spray and their brain activity was then studied.

In subjects exposed to oxytocin, researchers observed an increase attraction to their girlfriend or wife over the other women they did not know.

In short, oxytocin made the subjects more attracted to their permanent partner.

From an evolutionary standpoint, men are typically known to have sex with as many members of the opposite sex as possible, increasing their chance to disseminate their genes to as many sexual partners as possible.

However, there are advantages to staying in a monogamous relationship as a couple’s offspring is more likely to survive with two dedicated parents. Oxytocin seems to be the biological mechanism in play to keep couples together and happy.