So you’re suspecting something is up with your boyfriend or husband, but you don’t want to confront him about it.

Fair enough, there are a lot of women in the same boat as you. Luckily, there are ways you can tell he’s lying to you, just keep in mind these tips and tactics for lie-detection aren’t 100 percent reliable.

Even if you strapped on a lie-detector machine to your guy and asked him a bunch of questions, the reliability of these machines aren’t 100 percent.

Truth is, some people lie better than others.

Also, if you suspect something else is up, then it’s probably wise to look into the other aspects of your relationship.

Why do you feel this way? Are you feeling that he’s slipping away from you? Have you two been fighting — a lot? Maybe you’re doing something wrong in your relationship that’s making him less attracted to you. 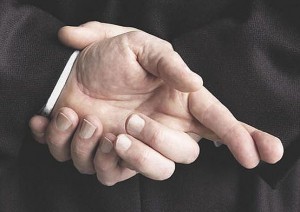 You need to ask yourself if he has any reason to lie to you. Sometimes, the fact that you even suspect he’s lying is just as important as if he is lying to you.

Remember, a relationship is built upon trust. If you can’t trust your partner, then this issue must be addressed.

Without further ado, let’s jump into some tactics that can help you discover if he’s lying to you:

If you ask him a question and he’s being extremely vague about details, he’s probably lying to you. This is one of the surest signs a guy is lying to you. That is, unless he’s a very quick and creative person.

2. He Looks Around a Lot

You probably know this one already. If he doesn’t look you in the eye and answer your question, then you have the right to be a little bit suspect. However, if he looks like he’s just thinking (a lot of people look up when they are legitimately thinking), then he might be telling the truth.

3. He Speaks in Sentence Fragments

You: “Where were you last night?”
Him: “I was at the bar with Thomas.”

You: “Where were you last night?”
Him: “Bar with Thomas.”

There’s a difference here between these two responses. If he’s the latter, then he may be lying.

If he touches his hair or face, or even if he just starts fidgeting, then you can probably be sure that he’s at least hiding something.

5. He Doesn’t Provide You with Specific Detail

Ask him something randomly specific about the touchy subject. Ask him stuff like, “Oh, did you wear that shirt I gave you that night?” or “What did you drink at the bar?”

The more of these questions you ask, the more signals he’ll give off that he’s lying.

6. He Wants to Change the Subject

You can tell he’s lying if he wants to dump the subject to talk about something else. If he does this, then let him, but bring up the topic again later and observe his reactions.