I’ll be the first one to admit that my late teens and early twenties saw their fair share of sex, drugs, and late nights — and I suspect I’m certainly not alone in that one.

But, according to a few recent studies, these indiscretions of my youth actually indicate intelligence.

While the study can hardly be considered conclusive — its findings were in part driven by online sex toy sales at Oxford and Cambridge universities in the UK — it is certainly an interesting finding.

The research was funded by sex toy retailer Lovehoney.co.uk, where Oxford and Cambridge students have spent a combined $31,461.

(It should be noted that previous studies have indicated that while intelligent people did indeed have stronger sex drives, they actually had less sex.)

Attempting to explain the findings, Annalisa Rose, an employee at a high-end sex shop in Brooklyn, suggests that “the ability to engage in an open sex life comes with the abilities of introspection and logical thought, and those require some level of intelligence.”

Come to think of it, that actually makes a lot of sense. Rose continues with further insight: “If we’re talking about an open sex life that comes from an emotionally healthy place, sexual mores are mostly made up anyway and intelligent people can rationalize past them.” 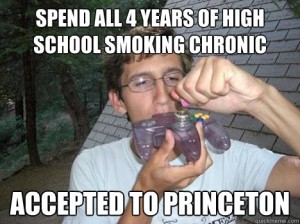 Again, this is sound reasoning, and is supported by a similar finding by a 2010 Psychology Today study that suggests smart people are more likely to use drugs.

Now, don’t go thinking that this finding makes doing drugs the “smart” choice, suggests the Esquire article: “A smarter person isn’t more likely to choose the ‘smarter’ choice of not doing drugs but is instead more likely to pursue the more evolutionary novel choice, one that would inherently expand their horizons … while a less intelligent person is less likely to pick up a heroin habit in the first place, the more intelligent person will rationalize it.”

So, should you go out and do more drugs or have more sex in an attempt to score higher on your next IQ test? No, sadly, it doesn’t work like that … but if you’re a genius, you’ll probably be doing plenty of both already anyway.