You are here: Home1 / Dating2 / How To Make A Man Fall In Love With You

You found him. Something about this man takes your breath away. You want him to be yours and yours alone. But first you need him to fall in love with you.

Whether you’ve been dating for awhile and want him to commit to you fully, or you’ve never even said two words to each other, I’m going to give you simple advice that will help you take him off the market for good.

Make A Man Fall In Love With You

The first step is to get him interested. Next, you’ve got to get him to chase after you. Once you’ve got him hooked, it’s all about making him happy. And finally, you have to become so important to him that he can’t imagine imagine life without you.

If you play things right, he’ll be head over heels in love with you before you know it.

Make Him Want You

This is the first step. Unfortunately there’s no magic potion that will make him fall in love with you at first sight. You have to start at the beginning and work towards that passionate, long-lasting love.

If you’re afraid to approach him, then you need to find another way to get his attention.

Whenever he’s around, you should do your best to project an aura of confidence, fun, and comfort. If it’s possible, have a conversation with a friend while he’s nearby. If you’re laughing and having fun, pretty soon he’ll be wondering what’s so funny.

It’s simple but effective. Flashing him a quick smile is a good way to show him that you’re interested.

If he’s already into in you, this will let him know that he has the green light.

If he’s never thought about you in that way, then it will make him start.

Whether this is a guy you’ve known a long time, just met, or have only admired from afar, a short glance and a smile is a great way to get things started.

The first step with flirting is body language. How you communicate with your body is extremely powerful.

When you’re nervous, your body will instinctively communicate that feeling by the way it’s positioned and that won’t do you any favours.

To start, open yourself up. Uncross your arms, sit or stand straight and tall, and keep your head high.

This sends the message that you’re approachable and interested. Being more open will make men comfortable talking to you.

Learn what to text a man you like (to make him want you!).

When talking to him, maintain eye contact. This shows him that you’re engaged in the conversation.

From there, just be present and keep the conversation going. You don’t have to flutter your eyelashes or lip whipped cream off his finger for him to get the picture.

Make Him Chase You

Imagine you’ve just been on a date with a guy. He’s handsome, charming, and makes you laugh. The date went well and you’re looking forward to a second.

The next day he calls you. You don’t answer, so he calls you six more times and leaves a bunch of voicemails. Did alarm bells start going off?

Men feel the same way. If you’re too eager, then he’ll get the sense that you don’t have a lot else going on in your life.

At this stage, every interaction makes an impression whether you like it or not and if you’re too available it just makes you seem desperate.

You may be saying, “any guy who thinks like that is a superficial jerk,” but he’s not even aware of it. Millions of years of our evolution attracts people to high-value partners.

Natural selection may seem harsh but if you understand it, you can use it to your advantage.

How To Play Hard To Get

Making a man fall for you is a cat and mouse game. If you’re very goal oriented, you’re probably used to going out and getting what you want.

This is a useful mindset for most situations but when you’re trying to land a man, you need to be subtle and take it slow. Remember: fools rush in and you’re no fool.

There’s the reason “playing hard to get” is a classic dating tip but it’s more complex than it seems.

It’s not about disappearing at midnight and leaving only a glass slipper for him to find. You still want to be available just not too available. You want to be open to his advances but always leave him wanting more. 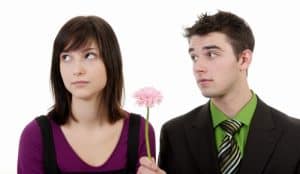 There are some simple things that will have him chasing after you without even knowing it.

To keep the chase alive, let him be the instigator. That’s not to say you can’t hint that you’re interested, but when he’s the one initiating plans and contacting you, you’ll be giving him the kind of challenge that will get him hooked.

When he does come calling, don’t be too quick to say yes. Instead of dropping everything to be with him, tell him you’re busy and reschedule later on.

This way he’ll see that you have a full life and he’ll want to be a part of it.

He’ll have to work for your time and attention, which again, makes you that much more of a prize to be won. This alone is giving him something the women he’s casually sleeping with aren’t.

Yes, I’m talking about sex. Sex is a part of life and whether or not you have it doesn’t reflect on you as a person but if you want to build something long lasting, consider holding out for a little while.

You don’t have to be a nun but don’t give it up on the first date even if you really want to.

If he’s really interested in more than just sex, he won’t mind.

The idea behind waiting for sex is that you want him to keep chasing you long enough for him to develop deep feelings beyond physical attraction. You want him to treat you the same way he did while he was still trying to get in your pants.

Obviously making each other happy is one of the most important things. How can you love someone if they don’t make you happy? If you can create a positive association between your presence and his happiness he’ll fall for you over and over again.

Do The Little Things

Guys aren’t used to girls being romantic so bringing him flowers and opening the door for him probably aren’t the best ideas to win his heart.

But if you’re looking to make him swoon, remembering what’s important to him is enough.

Surprise him with a dinner that you know he likes. Ask him his favourite movie and then watch it with him. The point here is that you’ve taken note of something he’s said and acted on it.

It’s important to be agreeable. Don’t agree with everything he says but don’t shoot down his ideas, make him feel stupid, or argue just for the sake of it. You can still tease him and have those fun, flirty fights but only about stuff that isn’t actually serious.

Ideally, this will happen naturally. If he’s someone you want to be with long term then you’ll probably see eye to eye on a lot of things. Still, often opposites do attract.

Sometimes it’s his strange way of looking at the world that made you want him in the first place. Keep that in mind and try to go along with him when you can. He’ll appreciate your willingness to indulge him and you’ll be surprised where you end up.

Make Him Need You

Making him need you is about adding value to his life. The longer a relationship goes on the more you become enmeshed in each other’s lives. This dependence on one another is one of the building blocks of love.

You’re naturally going to rely on him as well. When you ask him to drive you to the airport or open a jar for you, it makes him feel like a big shot, but don’t be a burden.

Make sure that you’re putting in more than you’re taking out from the relationship. 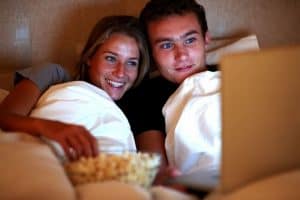 For starters, appreciate him. Men love to be appreciated by their woman, so make a point not only to thank him for all of the things he does, but also to show him how you feel.

This could mean paying for dinner, helping him pick out a birthday gift for his mom, or looking after him when he’s sick.

Show him that you’re not selfish and that you genuinely care about his happiness. This goes a long way with any guy.

If you can be the person he goes to for support or a comforting shoulder, then he’s going to keep you around.

You’ll find him reaching out to you and you two will spend more and more time together. This is the easiest path to falling in love.

How Long Does It Take To Fall In Love? 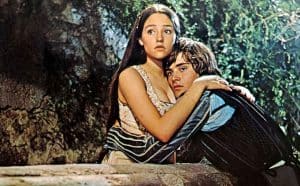 For Romeo and Juliet it took about five minutes, but we all know how that turned out.

The boring, real answer is that it varies. There are no hard and fast rules in love and this is no exception.

If he’s not taking you seriously or is unwilling to be exclusive, try my Devotion System program. I’ve spent years researching how to make a man stick by your side for good.

But as I’ve said, don’t rush it. If he says he loves you on the first date, he’s either lying, he doesn’t know what love is, or he’s a few cards short of a full deck.

It takes time to build the kind of love that lasts.

Don’t worry about when he says “I love you.” While it is an important step, it’s not the best way to tell if what you have is real. What’s important is whether or not the relationship is moving forward.

Ask yourself these questions

These are the markers of love. If you can honestly say yes to these questions, then congratulations, he has officially fallen for you!