You are here: Home1 / Dating2 / How To Go From Friends To Dating

So you’ve been hanging out with a cute guy.

He’s smart, he’s funny, and you’re super comfortable around him.

There’s only one problem…

Here’s a foolproof method for making the jump from friends to dating in just a few weeks.

How To Go From Friends To Dating

Believe it or not, it’s definitely possible to go from just friends to dating

But first, you have to ask yourself if dating a friend is a good idea. Before you make a move, you need to be sure of your true feelings for this guy.

You’re comfortable together, he makes you laugh and when he’s around, everything just seems a little brighter. But do you really like him romantically?

Ask yourself these four questions before dating any friend.

1. Do we want the same things in a relationship?

Obviously you work well as friends or you wouldn’t be considering changing the relationship.

But do you want the same things?

If you’re close then chances are you already know whether or not he’s looking for something serious. If you don’t know, then casually bring up dating and relationships and see if you two share the same outlook and values.

2. Would we be good together?

Does he make you feel good about yourself? 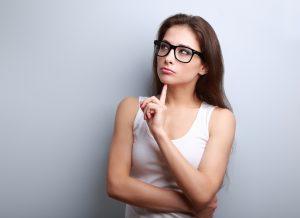 Does he build you up or tear you down?

Could you two be stuck in an elevator together for twelve hours without driving each other crazy?

This is where dating and friendship are different.

3. How would dating change our relationship?

Going from friends to more than friends is a big change. It’s common we get hooked on a guy because he’s funny and charming and we like the way he makes us feel as a friend but will we feel the same way when the relationship changes?

You’re going to be spending more time together and relying on each other more often. Do you think he’s up for that? Are you?

Plus, you need to consider what would happen if things don’t work out.

It’s common for dating to ruin a friendship or even disturb whole friend groups.

This shouldn’t dissuade you from trying but it’s important to be aware of this moving forward.

4. Why are we not together already?

This is the key question. If you two are attracted to one another and you’re both available, why are you not together already? You clearly have chemistry.

Make sure you know the answer to this question before you move forward. Quite often it’s as simple as the fact that you were seeing someone else when you met, you’ve changed as you’ve gotten to know one another, or you don’t know how the other feels.

But sometimes it’s because he’s just not interested. Be honest with yourself and make sure that you have a chance before you take your shot. You don’t want to lose a friend and a boyfriend.

All that aside, there are plenty of reasons that it’s great to date a friend. 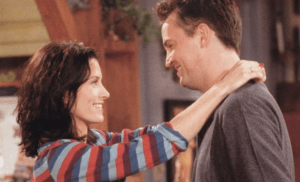 For starters, a lot of great relationships begin as friendships. Look at Chandler and Monica. Robin and Ted. Penny and Leonard.

This often works because you’ve already made a connection outside of the bedroom and you know each other’s personalities and values.

You know what it’s like to spend time together and you enjoy just being yourselves. This takes a lot of the guesswork out of the early parts of a relationship so you can focus on the passion.

Plus, if it’s a long time coming, the anticipation alone makes it super hot and exciting. Plus, you get to finally see them naked. What’s not to like?

How To Date Your Friend

Alright, so you’re convinced. You’re going to make him yours. But how? This is way different than getting together with a guy you’re not friends with. We’re in uncharted territory here. 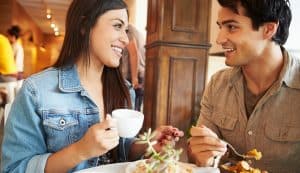 With that in mind, follow these rules to have your best chance to go from friends to dating with no drama.

I know you’ve been pining after him for months but that doesn’t mean you have to go from 0 to 100 just like that.

In fact, it’s all the more reason to take your time. Think out what you’re going to do and even if it takes a month for him to get the hint, you’ll have more luck than if you just throw yourself at him.

Life is not a romantic comedy. Don’t hold in your feelings for your friend until you explode with a big long speech about how you love them and want to be together forever.

As charming as it is when Rachel McAdams does it, it rarely goes this way in real life. Your goal is to not put too much pressure on him, yourself and the relationship. Going too fast too early is a great way to make men pull away and lose interest.

If you can make the transition easier then you’ll be getting this new dynamic off to a great start. There’ll be room to get mushy later.

It seems like a good idea to make yourself as available as possible and to show him that you’re not interested in other guys while you’re trying to get him to notice you. This is actually the wrong approach. Here’s why.

It will make him jealous and make you look desirable.

Plus, it’ll make dating you seem like more of a possibility and not some huge deal. If he thinks you never date then even if he likes you he’ll be less likely to make a move. You want it to seem like dating is something that you do for fun.

That means it’s not a big deal and less likely to ruin your friendship if it doesn’t go 100% right. This raises the chances of him asking you out.

Don’t sleep with him

To be blunt, just because he sleeps with you doesn’t mean he wants to date you.

In fact, it can leave you in a weird grey area between friends and dating. If he can get your friendship and your body, why should he want to make things more committed and official?

It’s the sad truth that guys don’t want to rock the boat and scare women off so he’ll take what he can get, rather than risk getting too serious. 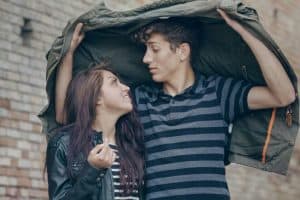 Guys can be pretty dense. You want to get him to realize you’re interested in more than friendship without coming right out and saying it (at least for now). Ramp up the flirting.

Laugh at his jokes and touch his arm. In a group setting, focus on him more than anyone else because he’s more than just another friend.

Don’t be afraid to show him you’re excited to see him and that you have fun together. Hugs are more than encouraged. This is step one to making a man fall in love.

Your role as his friend gives you the inside scoop about what he likes, what he’s interested in.

Don’t avoid getting flirty and asking him about dating and girls.

This is a great way to get the idea in his head that you’re interested in being more than friends.

It’s always a good idea to take pride in your appearance. Make sure your look is on point, ditch the sweats, and keep it tight.

Don’t be afraid to show some skin. Normally I don’t recommend this when trying to attract a guy but you two are already close. He sees you as a friend. You want him to see you as a woman.

By upping your affection, flirting and time spent with him, you’re going to change the way he thinks without him even knowing. If this works he’ll think he’s come up with this all on his own. 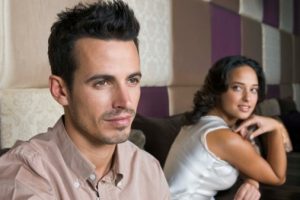 If all else fails, just be up front

There’s nothing wrong with the direct approach.

There are plenty of guys out there who wouldn’t know flirting if it punched them in the face.

For these guys, I’d recommend talking about it. This comes back to managing your expectations and being honest with yourself about his feelings.

If you think you still have a shot, then ask him out. If it doesn’t work out, at least you tried.

What Is The “Friends With Benefits” Zone? (Friend Zone For Girls)

6 Things To Look For In A Potential Boyfriend