You are here: Home1 / Breakups2 / Why Is My Ex So Mean? The Harsh Truth About Your Cruel Ex

Your ex used to be a kind, caring, and considerate person…

Now they’re acting rude, cold, and distant since breaking up.

This has left you wondering, “why is my ex so mean?”

Why Your Ex Is So Mean

Now, let’s talk about why your ex is being mean or rude to you.

This is actually something that happens quite frequently, so don’t think you’re alone if this is a scenario you’re facing right now.

I hear this question from my coaching clients all the time.

In some cases, it can seem like your ex is flip-flopping between being nice to you — or even downright affectionate and flirtatious — while the next minute they’re being a jerk or ignoring you altogether.

Or, maybe your ex just seems to be trying to pick a fight every time you interact with them.

Regardless of what your ex is doing, if they’re being cold, distant, rude, or confrontational, it’s almost always for one of three reasons.

Reason #1: They Still Have Feelings For You

This may sound bizarre, but often when your ex is acting like an asshole to you or being cold and distant, it means they still care about you or have feelings for you.

Their cruelty or confrontational behaviour is their way of dealing with these emotions, and typically it’s actually a subconscious thing rather than an intentional strategy.

For any number of reasons, your ex has decided that breaking up is the best, most logical way forward… and yet, they’re still in love with you to some extent, or at least still have lingering romantic feelings for you and care about you. 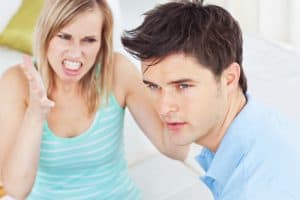 These are feelings they no longer WANT to have, really, because they simply make getting over the breakup more difficult…. And as a result, they can become cold and rude or often try to pick fights whenever you talk to them.

It might sound bizarre, but being mean or rude is a common way many people try to suppress these feelings and emotions after a breakup.

This is especially common when your ex is sending mixed messages.

If your ex is being very ‘hot and cold’ towards you, where they’re sometimes being nice and affectionate one minute and then suddenly acting mean or indifferent the next, that’s a good indication that they’re doing this because they still care for you and have an internal struggling going on within themselves over the breakup.

Reason #2: They Feel You’re Just Not Getting The Message

The second reason your ex could be acting mean, rude, or confrontational is, unfortunately, because they feel this type of behaviour is necessary in order for you to leave them alone and accept the breakup.

By treating you poorly or being a downright asshole towards you, they may be hoping you’ll give them the space they’re looking for and stop trying to win them back.

If you’ve been pleading or begging your ex since breaking up, asking for another chance, or promising to change if they’ll take you back…. Then your ex could very well be feeling like you’re just not accepting the breakup, and being cold and rude to you in order to try and break through your denial and get the message across.

Reason #3: They Hate The Idea of Hurting You

Lastly, it’s also possible your ex is being rude or trying to pick fights with you because they subconsciously feel like this could give them a “reason” to hurt you by breaking up.

This might sound totally bizarre, but it’s actually relatively common.

Essentially, your ex has decided to break up with you, but because they still have feelings for you and know you’re a good person… they hate the idea of having to hurt you or cause you emotional pain by breaking up.

RELATED: Make Your Ex Fall Back In Love With You

As a result, they’ll sometimes pick fights or be cruel towards you in hopes that you’ll take the bait and react angrily or be equally mean and confrontational in response.

This will give them a reason, a sort of justification, that will make hurting you by breaking up more acceptable.

Again, I know this sounds like a strange thought process on the surface, but human psychology is often complicated and things like this can happen subconsciously without your ex really thinking about it.

The question that remains is how do you react or handle this type of behaviour from your ex?

What should you do to ensure they stop being so mean, cold, or angry towards you… and go back to being the kind, considerate, and loving partner you remember from the time you were together?

What To Do When Your Ex Is Being Cruel

First, you need to avoid ‘taking the bait’ and being drawn into any kind of conflict or arguments with your ex.

If they’re being mean or rude, react in a way they won’t expect, by not falling into their trap and being kind, polite, and defusing any potential confrontation.

Now, it’s important not to be too nice to your ex, but you also need to take the moral high road and not let yourself be dragged into arguments or lash back out at your ex in response to their rudeness or cruelty.

Second, you may need to re-engage in another period of No Contact if your ex is exhibiting these types of behaviours after breaking up.

Typically, nothing you can say or do is going to help change the way your ex is acting.

Ignoring them completely and giving them time and space is the best strategy to change their behaviour and their opinion about the idea of ever getting back together.

I always advocate shutting down the lines of communication with your ex if you’re in doubt about what to do, because this is almost never going to hurt your chances of getting them back in the long run.

It will also ensure you don’t fall into their traps or accidentally make matters worse by doing or saying the wrong thing.

And thirdly, if you’re struggling to understand your ex’s words or actions — or if you just don’t know how to handle a particular situation with your ex in order to win them back — please consider signing up for my 1-on-1 personal coaching service.

Does My Ex Think About Me? (What Your Ex Is REALLY Thinking)