Online dating has changed dating forever but with so many dating apps on the market, how do you know where to spend your time?

I’m going to go through the benefits and drawbacks to each app and finally answer the question “Which is the best dating app for women?” from the perspective of a dating and relationship expert.

The Best Dating App For Women

The truth is, there is one dating app that stands above the rest in terms of its ability to match you with the right guy.

That said, there are plenty of other options that might be a better fit for your needs. 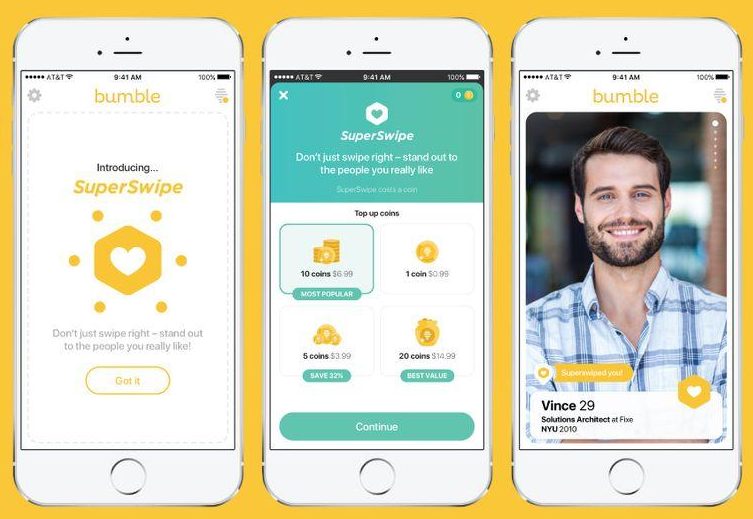 The app for the woman who knows what she wants

Bumble functions similar to Tinder, but it flips the script, giving the woman all the power to make the first move.

That’s right, men aren’t even given the option to send you a message until you’ve sent one first. This can work to your advantage–it lets you to start off in the driver’s seat.

But now “don’t just say hey” cuts both ways. If you’re someone who has trouble breaking the ice or you want him to make the first move then maybe Bumble isn’t for you.

Another thing to remember is that both of you need to send a message within the first 24 hours or the match is over. For an additional fee you can recover old matches or send their equivalent of Super Likes.

Bumble also tends to be a bit buggy. Sometimes profiles don’t load and messages can’t be sent. Usually resetting the app is enough to fix these issues but it certainly is annoying.

But that aside, Bumble is a good option because of the sheer number of users. Bumble has 5.4 million users in the US alone. 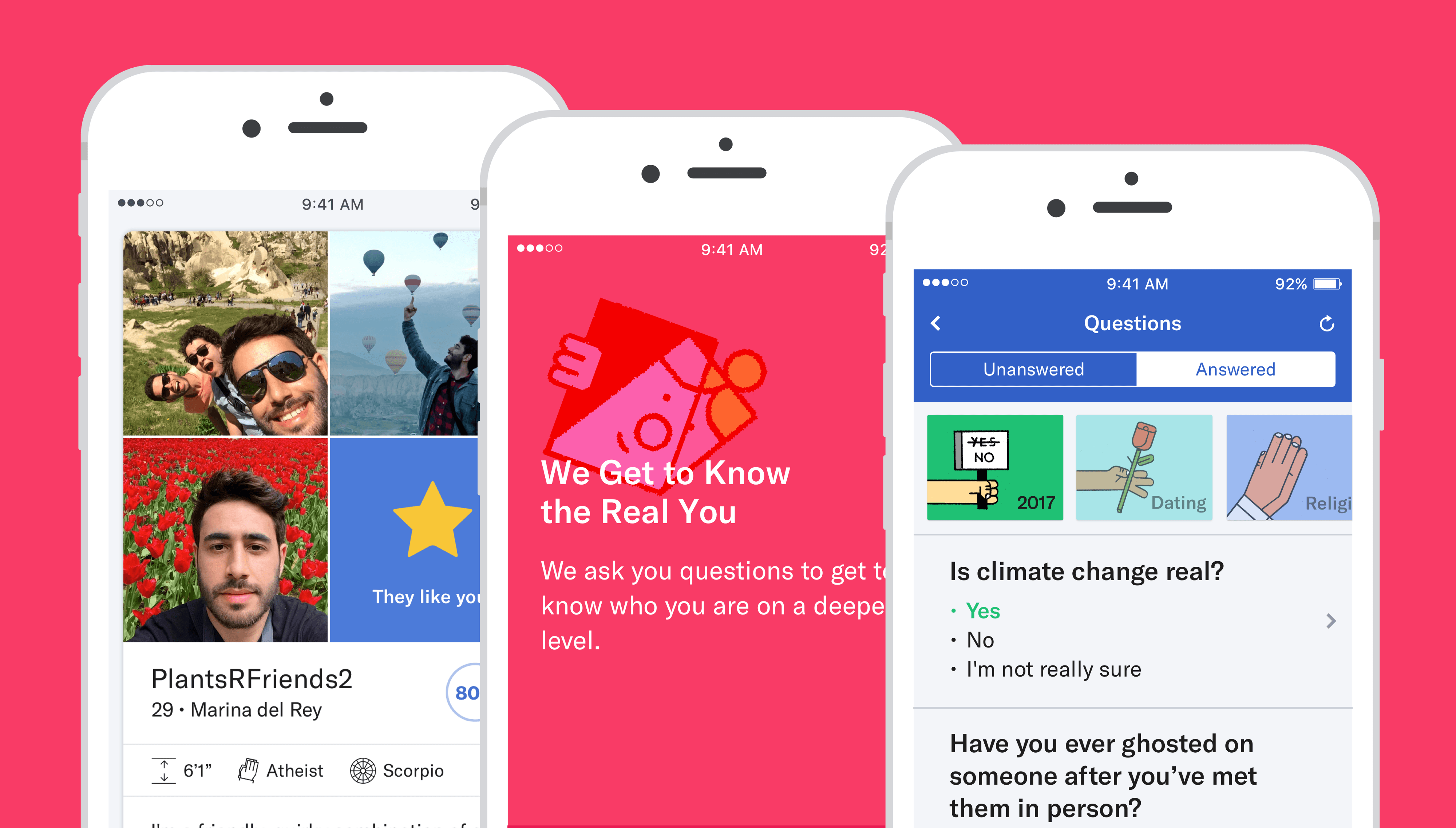 The app for the socially conscious woman

OKCupid has rebranded in recent years. Their audience skews younger and more social justice focused than ever before.

If you consider yourself a card-carrying feminist or leftist and are interested in progressive causes then OKCupid may be the place for you to find love.

They offer a whopping 12 gender identities and 20 sexual orientations so no one gets left out.

That said, I’ve heard reports that they use screening questions to try to root out more conservative daters. 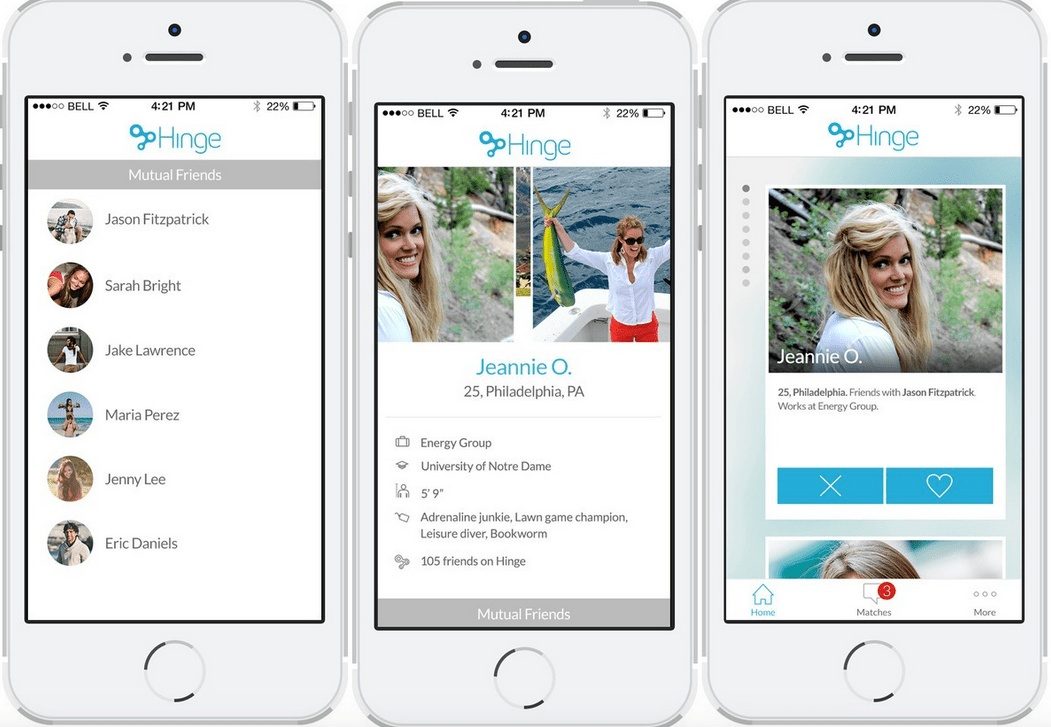 The app for the serial monogamist

Hinge positions itself as the “anti-Tinder”. You scroll through profiles rather than swiping and it offers detailed questionnaires like Plenty Of Fish.

The userbase of Hinge is more drawn to relationships than one night stands and that’s one of the reasons it has exploded in popularity recently. I give Hinge a big thumbs up. 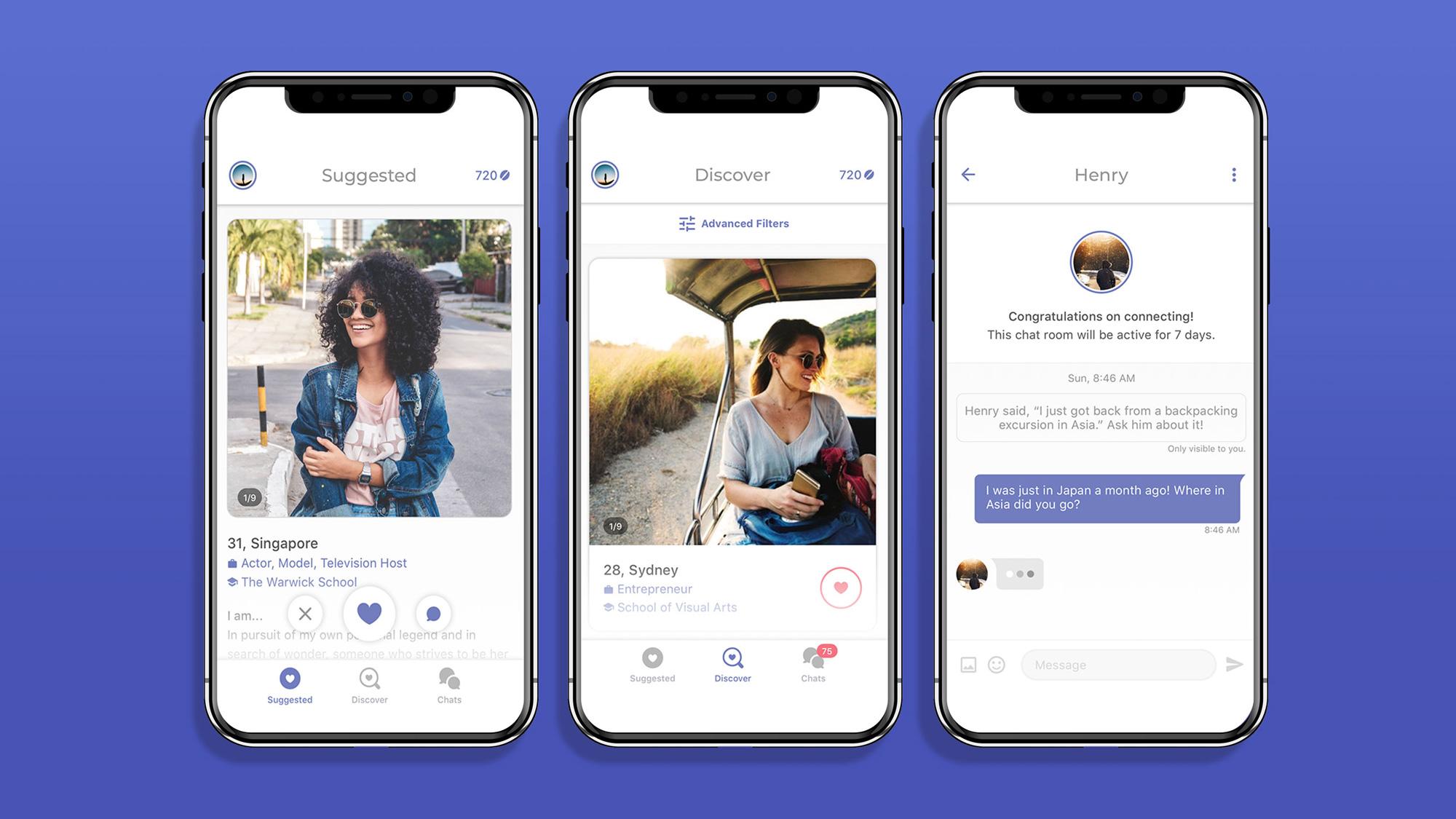 The app that’s hard to recommend

I find the aesthetic and interface of Coffee Meets Bagel to be clunky and difficult to manage.

It’s aiming for a more sophisticated audience than Tinder but it still lacks the popularity of most other dating apps. And more bad news, its simplistic algorithm only gives you a limited number of matches a day. Not impressed. 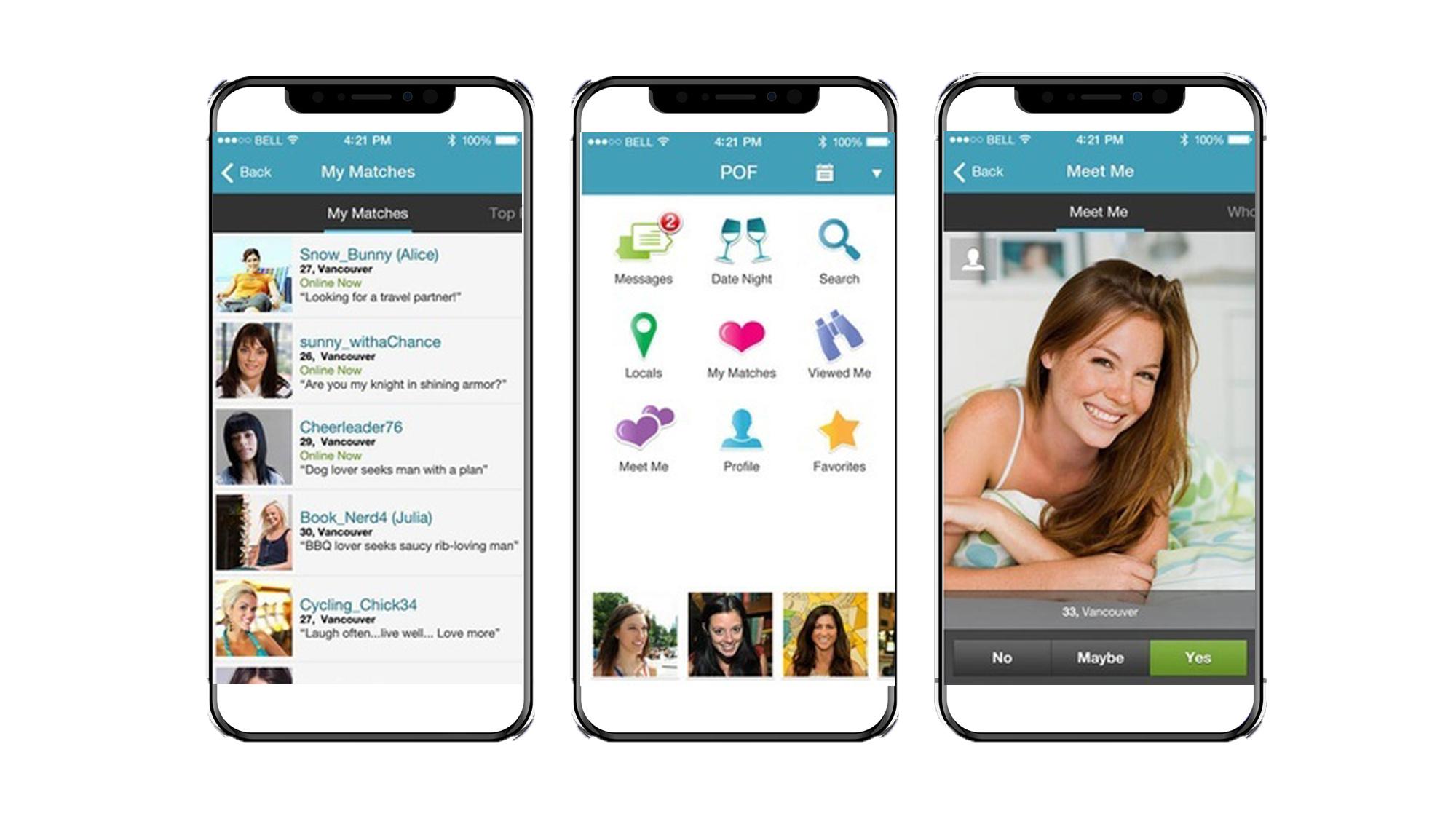 The app for the discerning dater

Plenty of fish has been a respected name in the dating game for a long time now. It’s popular among more mature daters and its simple design makes it easy to recommend.

Its looks are dated but it’s got a big user base and offers pretty in depth questionnaires to help dial in your matches and understand more about potential dates. 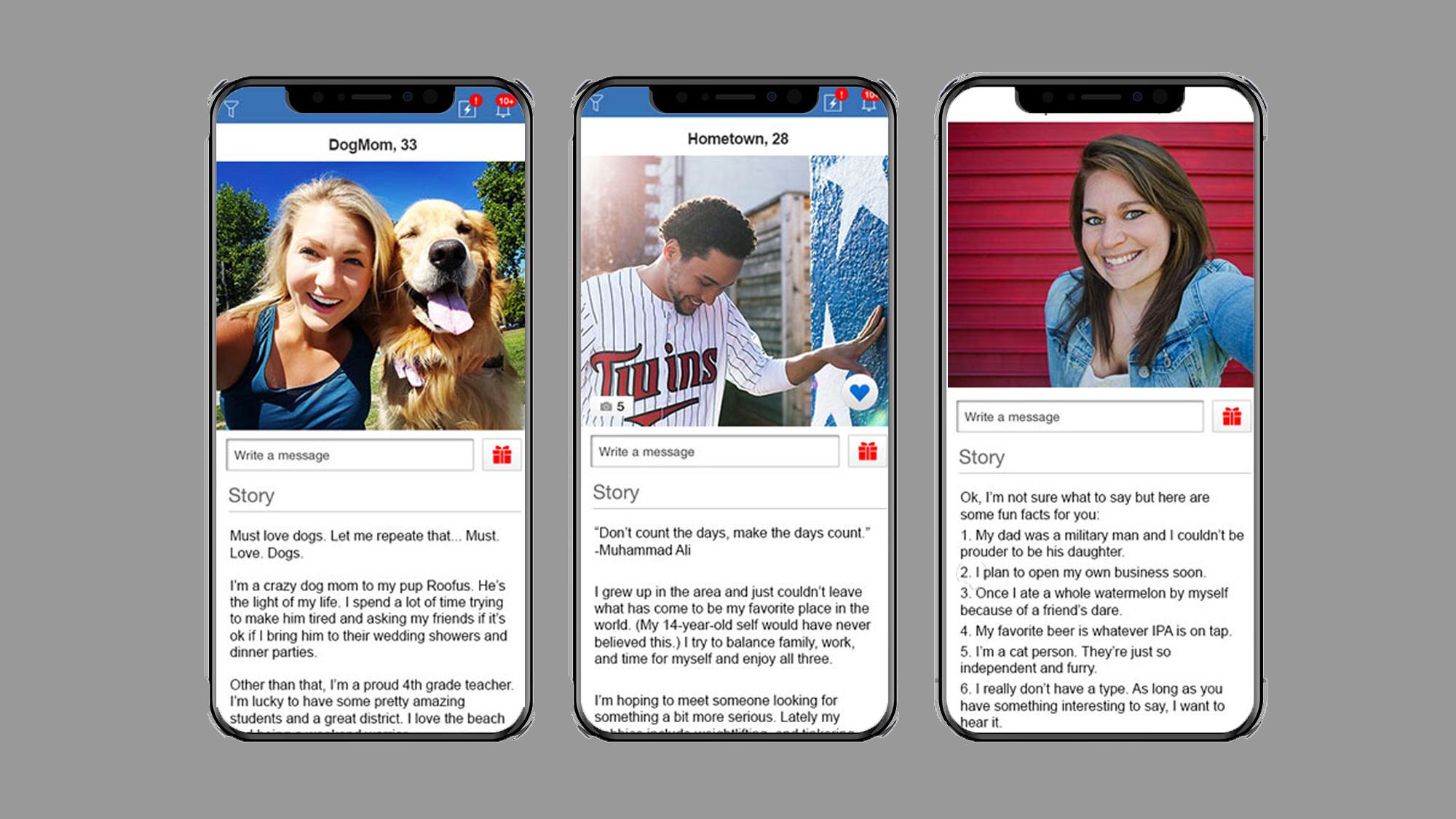 The app for the shy woman

Zoosk has a similar philosophy to Tinder and Bumble but offers a variation on the formula thanks to a “maybe” option and automated ice breakers for shy daters. It also boasts one of the fastest signups so if you’re in a hurry, maybe it’s the right choice for you.

That said, an ugly interface and spammy notifications makes Zoosk difficult to recommend over other options despite its large user base.

There’s a new trend in dating apps that have come about in recent years—-the exclusive app.

Apps like Raya and The League require an application and only allow people who meet certain criteria to join.

These criteria often have to do with physical attractiveness, career success and Instagram followers. The thinking is, if you’re sick of dealing with the unwashed masses, you can hop on The League and access a better class of daters.

In my opinion, these apps are snobby. There are certainly people on dating apps you should avoid but this isn’t generally because they don’t have enough Instagram followers or a Porsche.

Aside from elite dating apps, there are apps that are designed for a specific audience.

Apps like Christian Mingle, Farmers Only, and J Swipe cater to specific groups. They’re a good choice for those who are looking for dates that share similar lifestyles. While these apps don’t bar anyone from joining, chances are you’re not going to make many connections if you fall outside of their specific target audience. 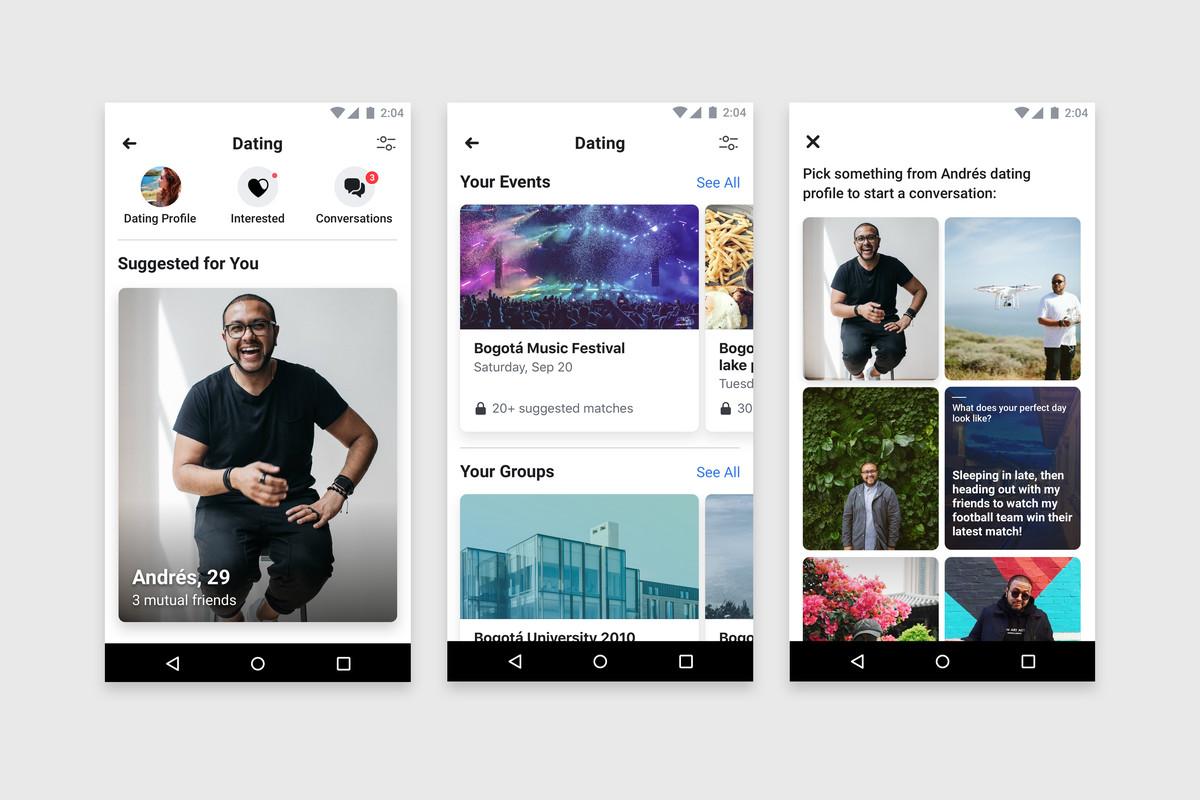 The app for friends…with benefits

Facebook dating came onto the scene recently and while it’s yet to really blow up, it’s certainly one to watch.

Don’t worry, Facebook isn’t going to tell your friends that you think they’re dreamy. Facebook dating is separate from the rest of facebook. It only uses your information to help you find love. It never shares your dating activity on your wall or anything like that.

Facebook dating differs significantly from Tinder. There’s no swiping. Instead you’re matched with friends and friends of friends based on your profile. You can pass on them or you can reach out and send a message.

Sliding into DM’s is certainly frowned upon but I’ve seen many great relationships start this way.

This can make for a more organic connection than you’d find dating apps and lets you get to know someone outside the context of dating before you decide to take the next step.

This method can be difficult to navigate. Just don’t be too forward or aggressive. Don’t double message, don’t like all their posts and be sure to let them carry the conversation once you’ve reached out. 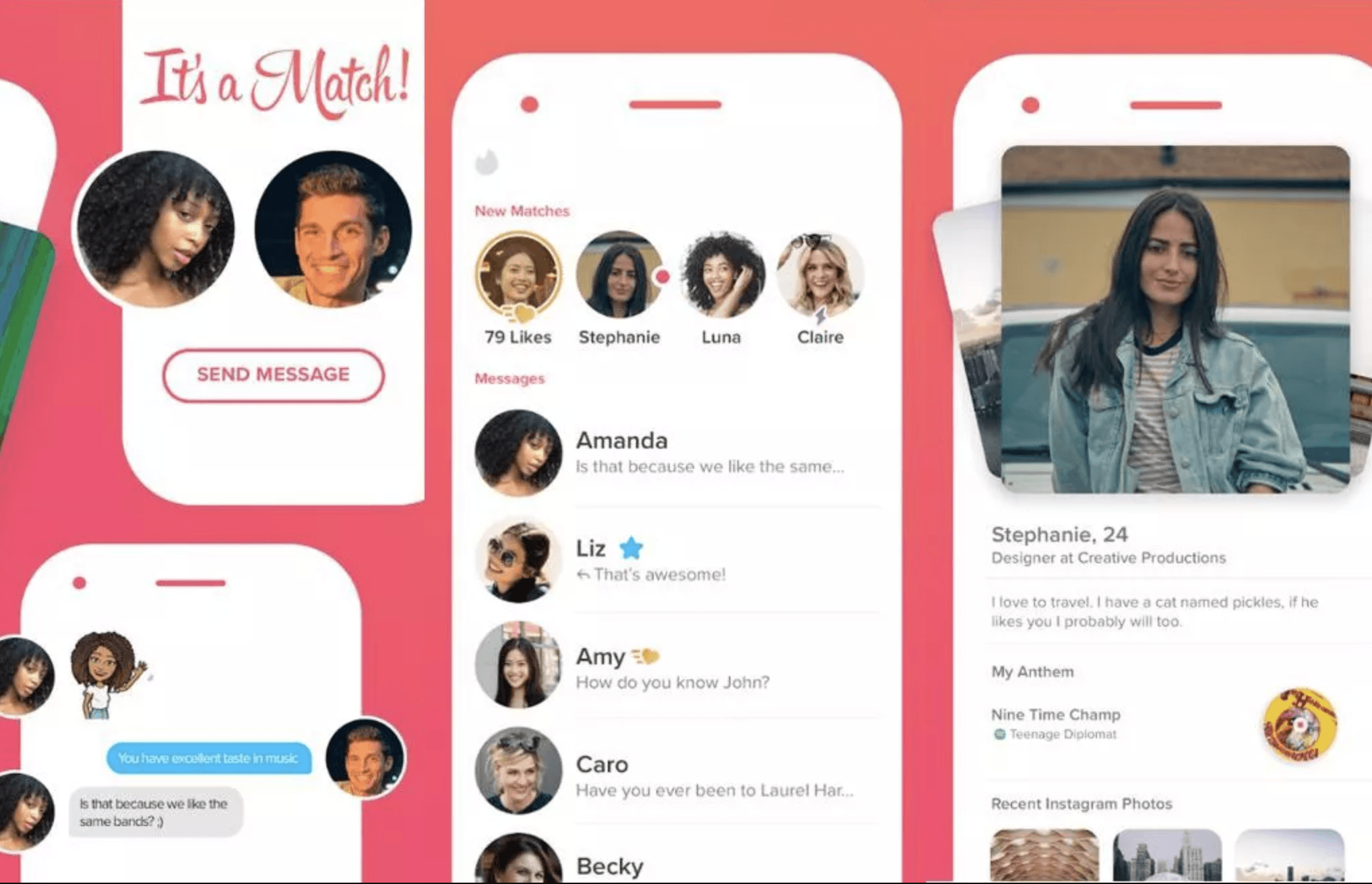 The best dating app for women

So after all that, what is the best dating app for women right now? The answer is… Tinder.

I know, this won’t be a huge surprise to anyone but Tinder is still the best option for online dating for the vast majority of women. Tinder is the best because, put simply, it’s where everyone is. Its popularity means that it’s the first place men go for online dating and it should be your first choice too.

While Tinder has its downsides, it is definitely no longer just for hookups.

I know so many women who have met their boyfriends and husbands on Tinder.

Just make sure your bio is clear and be honest about your intentions and you should be just fine.

Tinder’s popularity means that it’s also the most functional of all the apps and its huge user base means that its algorithm is improving all the time.

The Truth About Premium Options

Most if not all of these apps offer both free and paid versions. You pay a subscription fee for greater access, extra features (like read receipts), and priority matching so that your profile will be seen by more daters.

In my opinion, the free options are your best bet. Not only are the premium apps often a waste of money but they put the focus on the wrong part of dating.

The apps are only here to introduce you to new potential dates.

Once you’ve connected, you should be moving on to meeting in person as soon as possible. You could talk for weeks and months only to find out on your first date that there’s no chemistry.

Remember: dating apps are just a tool, not an experience in themselves.

Premium options get you wrapped up in the window dressing and you can forget about why you joined them in the first place… to meet someone and start a relationship.

Plus, having an ongoing subscription to a dating app can actually give you incentive to keep playing the field to justify that sunk cost. Instead, stick with the free apps so that you’ll have no incentive to stay online a moment longer once you’ve met someone awesome.

WARNING: Privacy and safety are always a concern when it comes to any online interaction.

Dating apps ask for access to a lot of personal information. That’s why I can’t vouch for any apps not on this list. Some lesser known apps are just fronts for phishing scams. Make sure you do your own research before downloading anything onto your device. Beyond that, don’t give other users personal information that they could use to steal your identity or track you down in real life. Always have your first meeting in public and make sure your friends know where you’re going and who you’re going to meet. You can’t be too careful.

Why Guys Swipe Left On Tinder

Why Your Tinder Matches Don’t Message